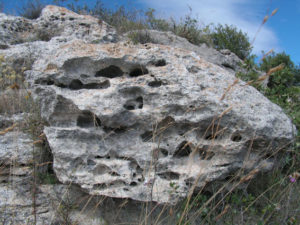 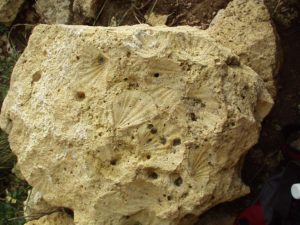 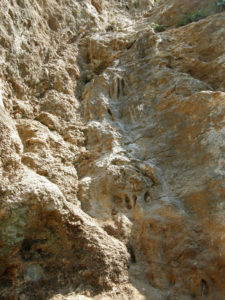 The rocky cliffs that have attracted the attention of climbers from all over Europe, and from farther afield, for decades are from the geological point of view made up of the Formation “Finale Stone” that can be dated to the mid-Miocene era that dates from around 16 to 10 million years ago. During this period the successive sedimentary layers that created this formation were deposited. In a very general sense the lythotypes that can be found in the area vary from conglomerates and sandstones, present in minor way in the general order of things, to bioclastic limestones made up mainly from the remains of coral colonies and shell fragments. The formation of “Finale Stone” can be subdivided into five different parts depending on the specific geological characteristics that make them up: the Poggio component, the Torre di Bastia component, the Verezzi component, the Roccia dell’Orera component and the Monte Cucco component. The most extensive of these components, one that distinctly characterises the “Finale Stone”, and also where most of the routes are, is the Monte Cucco component. In fact all the climbing crags come from this component apart from the routes at Caprazoppa and the Rocce dell’Orera (both situated in an area where the component rock is Rocce dell’Orera). The cliffs at Capo Noli are not part of the “Finale Stone” formation, as they are made of dolomitic limestone with a pre-tertiary bedrock, more than 65 million years old. The Monte Cucco component is almost entirely made up of bioclastic limestone cemented together with calcite, with a colour that goes from white to pink.

The stratification is not usually very obvious except in some areas where the successive layers are visible, for example at the crags the Anfiteatro di Monte Cucco, Gola dei Briganti or Bocca di Bacco. There are some discontinuous sandstone and conglomerate windows both at the base and internally in this component, as well as abundant organic remains, mainly coral colonies and encrusted algae; and at a more minor level echinoids, shell fragments and sharks teeth. The high level of porosity together with the low level of mechanical resistance shown by bioplastic limestone are reflected in the characteristics of the rock: it is in fact very soft, light and permeable. However from the climbing point of view, the most interesting characteristics are the difference in lithological terms between the internal walls of the rock structures, that is constituted of bioclastic limestone, and the outer superficial layer.

It is easy enough to observe how most of the rock surfaces are made up of solid and compact limestone, often with many pockets, water drops and  grooves, that often means the visual impact of the crags is that of a limestone massif. This is a layer of rock of varying dimension created by chemical precipitation due to rain water. There are however certain areas, of very variable size, where this layer is very thin or even non-existent and the bioclastic limestone emerges. These areas of rock often have a yellow-pink coloration and look heavily “eroded” with a general concavity in the rock forms. In these areas the rock can be much less compact, more friable and sometimes “dusty”. In some sectors where there are eroded cavernous areas the crags can have a very suggestive impact: you just need to go and look at Bric Pianarella or the western sector of Rocca di Corno where some unforgettable routes have been put up.

Karst rock phenomena both superficial and underground are present practically everywhere. Often at the crags you can observe characteristic concretions in the form of “tufas” that run along the rock surface as well as cavernous walls and small caves that stop suddenly of various shapes and sizes that become useful when it starts to rain.

There are also many underground cave systems that attract the attention of potholers, like the caves Grotta della Pollera and Grotta del Buio. The great variety in the forms the cliffs take and the many different characteristics on the rock surface means that the climbing in the area is very varied: from strenuous overhangs to vertical walls and technical slabs, to pockets that seem false to delicate balance sequences on micro-holds. The impact and style of climbing can change even within a single sector, and sometimes along a single route and this is demonstrated by the fact that on routes you often come across a singe really tough crux move, and this  becomes a sort of annoying encounter that keeps repeating itself…

Welcome to Finale By Thomas

Hi, I am Marco Tomassini
alias Thomas
I will tell you a little bit about myself…